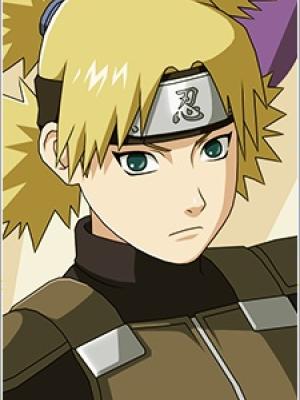 Temari is the oldest child of the Fourth Kazekage, making her the older sister of Gaara and Kankuro. Temari is generally overbearing, if not crude, toward those around her, often not being afraid to speak her mind. One of the few things shown to intimidate her is her younger brother Gaara. She very rarely stays true to her normally tough, demanding attitude, when around the boy, due to the fear of Gaara's wrath. Temari does have a caring side, and is not above showing concern for others. She is often seen with Shikamaru. Temari is a keen analyst, and can easily deduce an opponent's strategies and weaknesses soon after a battle begins. For actual combat she uses her giant iron fan that, in addition to serving as a makeshift club, can be used to glide upon in order to intimidate her foes.