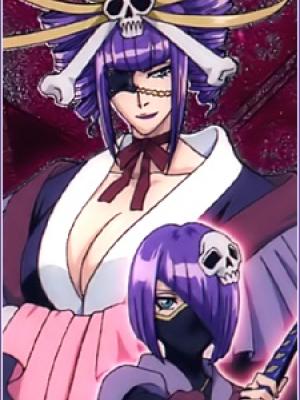 Katen Kyōkotsu's spirit takes the form of two women. One is a tall, purple-haired woman with a red ribbon around her neck and an eye patch covering her right eye. She wears an indigo cape with a skull imprint on it and a long, dark dress that flows to reveal her cleavage (much like Rangiku Matsumoto). Her clothing resembles that of a oiran, which is a high-class Japanese courtesan. She also wears a golden bone headdress. The second is revealed later, and is dressed in dark, close-fitting clothes. Katen Kyōkotsu states that she has grown bored of Shunsui's "dull" nature after being around him for so long.

This zanpakutō is unique in that it exists as two completely separate swords, being as a daisho sword pair. In Katen Kyōkotsu's released state, the daisho sword pair transforms into two large swords resembling dao or falchions. Kyōraku's zanpakutō has the ability to manipulate wind. Its first attack is titled "Bushō-Goma" ("Lazy Isolation"), in which a blast of wind, which is used to temporarily distract the opponent, is summoned from his swords. The second attack is titled "Takaoni" ("Mountain Demon"). Starrk interrupted the attack with his cero, so it is currently unclear what the attack is actually capable of. The bankai is unknown, however, Ukitake stated that Kyoraku "shouldn't use it when so many people can see it."