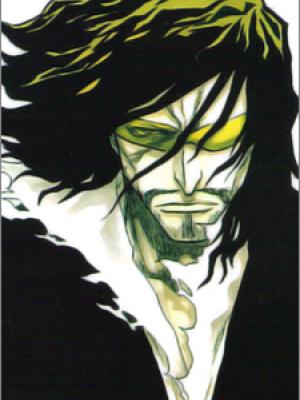 Ichigo's zanpakutō is named Zangetsu (斬月 lit. cutting moon). The spirit of Zangetsu resembles a 30 to 40 year-old man, and Ichigo calls him "old man" (おっさん ossan) as a result. Zangetsu has also been called the "black-clothed man" (黒衣の男 kokui no otoko). Zangetsu is portrayed as wise and calm in most matters, and fond of testing Ichigo in unusual ways, many of which have a purpose completely contrary to the stated goal. Zangetsu has displayed the ability to temporarily close fatal wounds during combat, though whether or not this is a unique ability is unclear. Unlike most zanpakuto, Zangetsu has no release command. The shikai form of Zangetsu resembles an over sized, though more elegant, cleaver blade without a hilt guard. The sword is as tall as Ichigo is, 1.74 meters, and has a black blade with a silver edge. When not in combat, the cloth extends to cover the rest of the sword and falls away when necessary, shrinking back to a manageable size. The cloth can also be used to swing the weapon like a flail and toss it at opponents, but this is rarely done.

The bankai of Zangetsu, named Tensa Zangetsu (天鎖斬月, lit. heavenly chained cutting moon), is considered completely out of the ordinary for any zanpakutō. Unlike most bankai forms, which usually create some sort of massive creature or effect, Ichigo's bankai actually shrinks his sword down to a daitō (Japanese long sword) with a black blade, handguard in the shape of the manji (which is the kanji for "ban," meaning "full"). The cloth wrapped around the hilt is replaced by a short chain with a broken link, similar to that of a plus spirit. In addition to his sword, Ichigo's robe is replaced with a long-sleeved, ankle-length black coat with red lining that is closed at his chest, much like that of Zangetsu himself.

Zangetsu's special ability (in either form) is the getsuga tenshō (月牙天衝, lit. moon fang heaven stab, Viz: Moon-Fang Piercer of the Heavens), which fires concentrated energy blasts from the tip of the blade in the shape of a crescent moon.