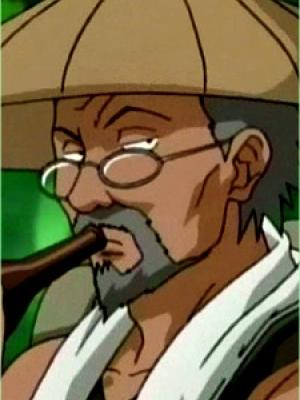 The bridge builder. Tazuna is a grey hared bespectacled man with a moustache. When first introduced, he wore a sleeveless v-neck shirt with an obi, pants and a pair of sandals. He also carried a towel around his neck and wore a pointed hat on his head. When seen in Part II Tazuna wore the same attire inclusive of the towel; a habit Inari has started to mimic.

He resolved to build a bridge that would connect the Land of Waves to the mainland to help restore its economic stability, which was against Gatō's interest. He knew that Gatō would try to kill him, but couldn't afford proper protection. It was because of this that Tazuna hired Team 7 under the false pretense of protecting him from bandits (this was considered a C-rank mission, thus reducing the cost). Unlike most of his fellow citizens, Tazuna was brave enough to defy Gatō's interests, although he was perfectly aware of the consequences. In honor of Naruto Uzumaki, and for his example of courage, Tazuna named the bridge the "Great Naruto Bridge" after its completion.