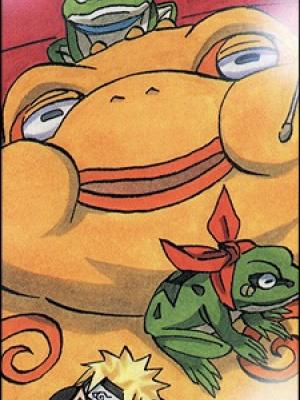 Gamatatsu (ガマ竜; Literally meaning "Toad Dragon") is one of Gamabunta's children and Gamakichi's younger brother who has a fixation with snacks.

Gamatatsu has shown that he'd choose snacks over someone's life. When Naruto is injured while fighting with Kabuto Yakushi, he replies, "Hey Gamakichi, do we have to wait for the kid to croak till we get snacks, cuz' I'm getting hungry". Although in the filler arcs Gamatatsu showed that he does care about Naruto's life as he was ready to rescue him before Gamakichi talked him out of it. It should be noted that Gamatatsu appears to be the most subservient and loyal of the main frog summons as he was willing to serve Naruto before Gamakichi brought up the snack remark. While being naive and childishly stupid, he does sometimes make use of his natural curiosity to help Naruto solve puzzles (like the mystery of the Ghost Warrior in the filler arcs). Gamatatatsu's obsession for snacks is so great that he waited a year since his first summon for the snack he was promised, even though he didn't get it. He is always hungry and asking his summoner for snacks, and often gets mixed up in unusual predicaments which he counts on his "big brother Gamakichi" to get him out of. In the english dub, his voice is jocularly high and he is usually used for comic relief when he is summoned. He also openly refers to Gamabunta as "daddy", which the older toad either chooses to ignore or simply doesn't mind.