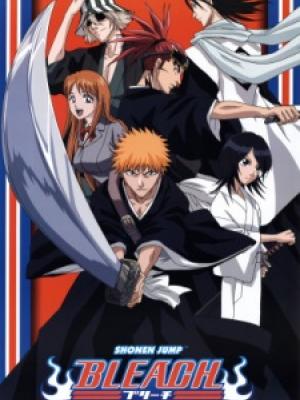 I started watching Bleach when Naruto became somewhat boring, and everyone was saying that Bleach was so much better than Naruto. So hopefully I downloaded the the first episode and it was exactly what I hoped it to be: some grown-up kick-ass anime, where you have both humor and action. So, from the first episode I knew I wanted to see more, and in 2 days time, I catched up with everybody else who had been watching from the beginning. Which means (for the people who aren't able to count that fast) that I watched about 16 hours in just 2 days time. What followed were a headache, a shortage of sleep, healthy food and drinks, a huge pile of homework and mad parents because I was too long behind the computer. Was it worth it? Well, if I had the chance, I would do it again in no time.

The main story isn't that special: some boy swinging with a sword and killing all of his enemies. Most people will react by saying: "ow, so this another one of those fighting animes?". Well, they are right about 1 thing: it IS a fighting-anime, but not just any fighting-anime, it's in a class of his own: the Bleach class. But the originality, which is actually pretty high, isn't the only good part of Bleach. It also has a big selection of different characters. Whether you like a sweet girl, a silent killing machine, a revengeful archer, or maybe some fighting teddy bear, Bleach has them all.

Going on with the animation: you shouldn't expect bright colours in Bleach, expect in the parts where everyone fights with each other (think of special attacks and things like that). But that isn't a problem since Bleach is a more mature anime, which means that bright colours wouldn't match with this type of anime. The many movements and actions are quick and flashy, which means a big plus for Bleach in this area.

The subbing at Bleach is also a good point. We had a few big subbers like Lunar and Dattebayo (Lunar stopped because Bleach was licensed, but Dattebayo still goes on) and a few minor subbing-groups like Bleach society and Hell Fan subs. The variety of subbers (most of the time, there are only 2 or 3 subbers) is an implication that Bleach is very popular among many people.

Besides the animation and the subbing, also the music in Bleach is very good. I remember myself singing along with the first opening song of Bleach, which resulted in my neighbours saying I had to take singing-lessons. That night, I sang twice as hard, as an honour to them. Although you would expect only hard songs (like Ichirin no Hana), you also have some less hard songs (for example: life and Asterisk). But it doesn't stop there: we shouldn't forget the background music, for example during the fights. A few animes will actually be able to have this much good music. And I promise you, when you've heard the first opening song, you just want to sing along, just like I did.

With bleach, I immediately have the cause of my anime addiction. Each week, I'm looking forward to another episode of bleach, as well as another view of my favourite Rukia. Although the story isn't that original at first glance, the humour, drama, fast action, Ã¡nd the great music, make this anime as a â€˜'must see''. But, I have to admit there are a few downsides as well: At a certain point, you'll get 26 new names, which makes it a lot harder to understand the story (wasn't she the healing captain? nope, she was information captain. No Way, she definitely was a vice captain). Another point is the huge popularity of Bleach: A lot of businessmen know Bleach is popular, so they are going to squeeze every little penny out of this success, which is a bad development for the anime itself. The last problem is a personal one: as the anime continues, you'll see and less of Rukia, which of course is a total waste. Even though all of this, I would still recommend it to everyone, unless you don't want to be as addicted as the rest of Japan.