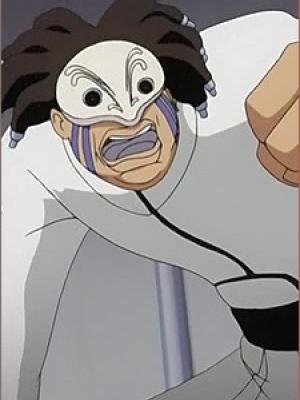 A low-level Arrancar in Sōsuke Aizen army. He is one of the guards for the underground passageways to Hueco Mundo.

Demōra is either an incomplete Arrancar or one that never learned how (or cared how) to seal his power in a form of a Zanpakutō, stating that he abandoned human form for greater power. He maintains features that give him the appearance of an hybrid between a human and a Hollow. Demōra appears as a dark-skinned deformed human, his stature is disproportionate to that of a normal human. The remains of his hollow mask covers the top of his face. He also has two strange linear emblems between the eyes and an enormous and deformed jaw. He tends to walk stooped because of his long arms which brushed the ground as if he were a primate. He also has black hair and a dreadlocks hairstyle with several ornaments and outstand earrings at the end of these. Underneath his mask he carries two lines tattooed down his cheeks. His Arrancar hakama is simple and similar to the ones of mostly Arrancar. Demōra's intelligence seems to be very limited, confined to show aggressiveness typical of the Hollow.