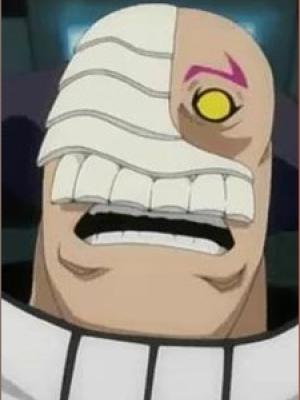 One of Szayel Aporro Granz's Fracción.

He is much larger than any of his other Fracción, with clown-like blue hair and his hollow mask covering up his right eye and nose. He cannot seem to talk but instead simply makes noises to show what he is thinking. He seems to be extremely intolerant of pain, gripping his hand, screaming after getting a shallow cut by Renji Abarai, and even flipping on his back, kicking in the air.

Once Szayel Aporro became bored of Renji, he sent his Fracción, Medazeppi in particular, to deal with him. After Renji got stuck in a pile of rubble, he was going to finish him with a punch before being interrupted by one of Uryū Ishida's arrows going through his midsection, killing him.