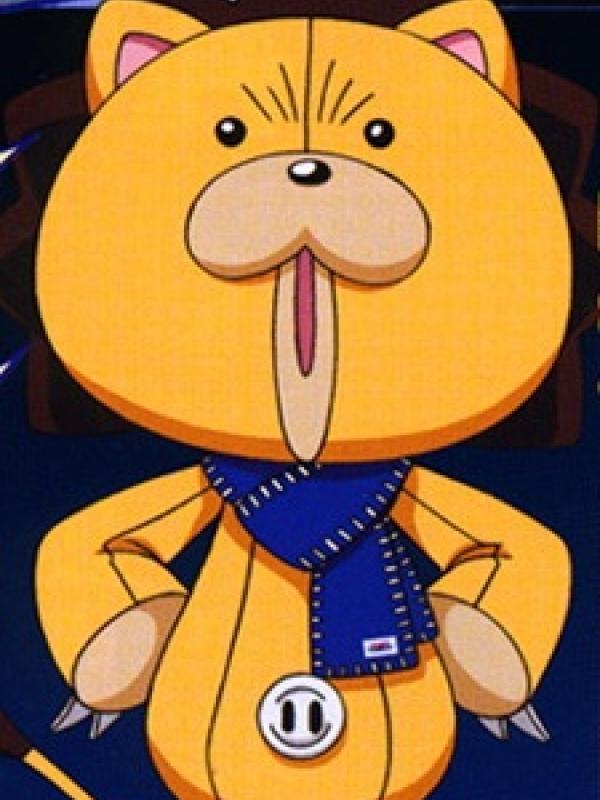 Kon primarily serves as a comedic foil in the series; when not inhabiting Ichigo's body, his normal plushie body is treated with little respect and much disdain. The humorously cruel treatment he is always subjected to provides the comic relief in Bleach. One of the only people who gives him any respect is Chad; however, Chad ignores him most of the time. His plushie body is a knock-off of the main character of the popular TV show Carnivore Kingdom, named "Ponkichi", which happens to be Chad's favorite show. It was a prize from the shooting game in the Karakura Town Festival.[2] He is constantly stepped on and torn, at which point Ichigo will have Uryū Ishida repair the plushie. Uryū usually adds something unwanted or unnecessary when doing so, such as dressing Kon up like a designer doll. Uryū also sewed a Quincy cross on the back of Kon's head as revenge after Kon attacked Uryū for turning him into a doll.

Kon is quite perverted and often takes advantage of his form to get girls to hug him to their chests, which rarely goes as planned. After Ichigo becomes less dependent on Kon to transform, Kon comments on how he wouldn't mind taking Ichigo's body out for a spin again, saying that he'd like go peeping and pulling up skirts because, as he puts it, "It's [Ichigo's] reputation that gets sullied". Kon is very fond of Rukia, calling her "sister", though this extends to basically any pretty girl.

Kon is a special type of soul pill called a "modified soul" or "ModSoul". When inserted into a body, an aspect of the body is made superhuman, which in Kon's case is enhanced speed and strength. Because of the shady origins of the ModSoul, the soul society called for the destruction of all ModSoul pills, but luckily, Kon was shipped out with a load of regular soul pills by mistake. This gives rise to his belief that everyone should be given a chance at life and should not be killed merely based on the circumstances of their origins.

His name "Kon" comes from the word "ModSoul Konpaku", another name for "modified soul". Though Kon wanted his name to be "Mod", Ichigo disagreed for the same reason that Kon liked it, it sounded too cool.

Bleach: Memories of Nobody
Mitsuaki Madono

Bleach: Memories of Nobody
Quinton Flynn

Bleach: Memories of Nobody
László Morassi

Bleach: Memories of Nobody
Patrick Pellegrin