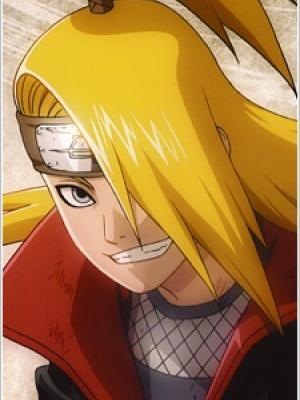 Deidara is a missing-nin from Iwagakure. Before joining Akatsuki, Deidara was as a terrorist bomber for hire, where his work attracted the attention of Pain. Pain sent other Akatsuki members to recruit Deidara, though he refused. After being defeated by Itachi Uchiha, however, Deidara was forced to join the organization. Deidara maintained a deep loathing for Itachi from that point further and became determined to defeat him, even training one of his eyes to overcome Itachi's signature ability: genjutsu. Deidara was partnered with Sasori upon joining the organization, whose artistic ability and insight Deidara admired. After Sasori's death Deidara is paired with Tobi whom he treats as a disciple. Despite Tobi's habit of accidentally angering Deidara, Deidara takes great care to keep Tobi out of harm's way and even dedicates his final moments to apologizing to him.

In battle, Deidara uses special mouths in the palm of each hand to create Exploding Clay, chakra-infused clay that explodes on command. He commonly uses the command "Katsu" to trigger it. The blast strength of his creations is determined by how much chakra he adds to them. His clay can take on any size or form, ranging from microscopic in size to copies of himself as tall as a skyscraper. Deidara refers to his creations as art, believing the most beautiful thing about them to be their detonation. His admiration for his art is such that he believes it can't be defeated, leading to overconfidence in battle. Depending on the complexity or potency of one of his works, Deidara applies it a designation from anywhere between "C1" to "C4", the former being the most basic and the latter being his strongest and most complex attack. For his final act, Deidara also has a mouth on his chest that, once provided with clay, turns him into a living bomb that destroys everything in a 10 kilometer radius.