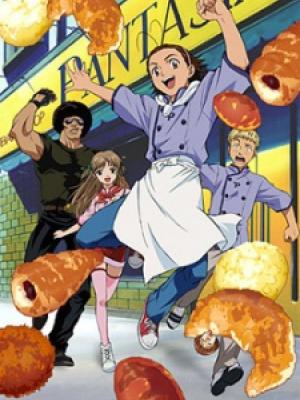 Yakitate!! Japan… Words simply can’t express just how fantastic of a series it is. I will try my best not be biased and earnestly give a fair review. Who ever said any series that has “!” are dead wrong.

This series is all about Azuma Kazuma on his quest to create bread worthy of being recognized as “Japan bread.” Azuma is far from being the smartest but he has a good heart and his determination is unsurpassable. To attain this goal he decides upon enter the famous bakery Pantasia. To be able to work for Pantasia he must compete with many other applicants in order to be accepted. Azuma who arrives late must start with a penalty for being late! Can he still manage to win? You will have to watch Yakitate!! Japan to find out!

As mentioned in the previous paragraph this series center character is Azuma Kazuma on his quest to create bread that will basically become nationally accepted as “Japans bread.” Some may at this point say “oh so it’s just about a guy trying to create really good bread, so what?” without hitting the person (I am not that cruel, usually) I would have to say you couldn’t be any more mistaken. This series is fresh, new and creative. There are not many series currently out that offer such variety that produces a perfect series such as this. For example, have you ever seen a series that can send a person to heaven by simply eating it!?!

The animation is fantastic, nothing short of smoothness throughout the series. The art used in the series is also nothing short of fantastic and new. From what I have seen there have been very little use of still shots and if they were used I don’t remember them making them very insignificant.

The characters themselves are a true gem to the series. Each and everyone have a different set of personality traits that give way for a perfect series (done correctly which this series has managed to pull off). The pacing of the show is fast paced leaving literally zero slow moments, always something important is happening and from what I have seen there has been no filler episodes and if there were I found them so entertaining that the series really couldn’t have been without. Each and every episode will make the viewer laugh and I guarantee that you will find this series highly satisfying even if you have no interest whatsoever in cooking. (Personally I don’t even like to cook)

The music in this series is simple fantastic, rarely does it occur that I actually go out and bother tracking down the OST but this series is different. Not only is the music during the show fantastic but the OP and ED are simply breathtaking. This series is clearly a winner in this department as well.

In a conclusion this is when the reviewer tries his best to wrap up and make the series attractive so other individuals will consider checking out the series right? Well guess I won’t do anything out of the ordinary! This series goes up and beyond to bring a nice and fresh series. It’s hard to explain but the “reactions” after seeing these individuals eat the bread is just amazing, some of the most creative “reactions” you could simply imagine (I know this may not make much sense but after viewing the series, if you do, you will understand). Not to mention you will see a special guest in the show such as Conan the detective! You will see DBZ & One piece Parodies and more! Does this series have solid art & animation? Yes. Does this series offer fantastic characters? Yes. Is the plot of this series great? Yes. Is this the type of series that can be re-watched over and over and still offer solid enjoyment? Absolutely. Is it a series a new personal favorite? Yes. Finally, should I give this series a try? I see no reason why not, do you?