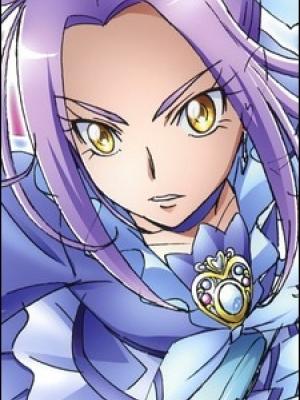 Siren is a female Cat-like "Fairy of Songs" and Mephisto's assistant. Although she was born in Major Land and is friends with Hummy, she became jealous when her title of the annual singer of the "Melody of Happiness" was given to Hummy instead and asked to be Mephisto's right-hand. As Siren, she has powerful abilities and can create Negatones using her dark powers. She can also use the powers of her necklace to take the form of any person she wishes. In her normal human form, known as Ellen, she is a strong fighter and can materialize notes to use as projectiles.

During Episode 21, her potential of Pretty Cure was awakened as she wanted to protect Hummy, who is captured by the Minor Trio. This caused her necklace to shatter, trapping her in human form and causing her to lose her power of transformation. Temporarily, she is sheltered with the Shirabes and attends school with Hibiki and Kanade. As Cure Beat, her dark purple hair turns bright purple and gains a side ponytail. Her theme color is blue, and her Fairy Tone is Lary. Her main weapon is the Love Guitar Rod, which uses the Fairy Tone, Sory. She is unique to the Pretty Cure franchise as being a former mascot and antagonist that later became a Pretty Cure.