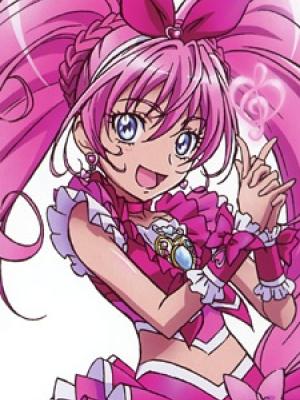 Hibiki is a 14-year-old student in the second year, class A of Private Aria Academy junior high. She has a bright personality, excels at sports and is a free assistant in all sport clubs, but isn't very good at schoolwork. Although her parents are celebrities in musical industry, Hibiki thinks she has no musical talent even though she has absolute pitch. She played piano as a kid, but stopped for a while when she felt she let her father down after a performance. She also loves to eat sweet things, particularly the cakes from Kanade's family's shop.

After meeting Siren, her potential of being a Pretty Cure was awakened when she and Kanade were rendered immune to Siren's attack, and through her musical score, she transforms into Cure Melody. As Cure Melody, her normally brown-orange hair tints light pink and becomes tied in extra long twin-tails. Her theme colors are various shades of pink, and her Fairy Tone is Dory. Her main weapon is the Miracle Belltier, which uses the Fairy Tone, Miry. In the Movie, she gains an upgrade Crescendo Mode granted by Crescendo Tone, and in TV story episode 47, all four members become Crescendo Pretty Cures, too.