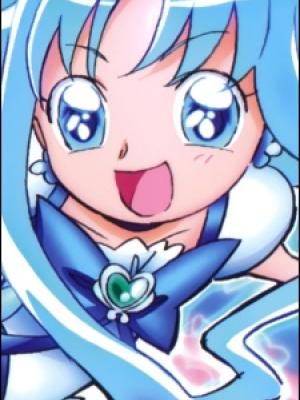 Erika is 13 years old and Tsubomi's classmate and neighbor and daughter of the owner of the fashion shop "Fairy Drop". In addition, she is the president of the Fashion Club. She loves fashion and designing her own clothing. She has a jealous complex towards her beautiful and fashionable older sister, who is a Charisma Model despite still being in high school. She is an energetic girl and bluntly says what she is thinking, although she also begins to change after meeting Tsubomi. She makes Tsubomi join the Fashion Club after all old members signed off. After she is informed the qualification of Pretty Cure, she agrees to help in the fight of Tsubomi. As Cure Marine, her theme color is light blue and her flower symbol is the Cyclamen. She has powers related to the ocean and can use auxiliary attacks such as Marine Shoot and Marine Dynamite in addition to her finishing attack. Her catchphrase is "Even my heart, that is wider than the sea, is at the limit of its patience!" (海より広いあたしの心も、ここらが我慢の限界よ！, Umi yori hiroi atashi no kokoro mo, kokora ga gaman no genkai yo!).

She introduces herself as "The flower swaying in the sea breeze, Cure Marine!" (海風に揺れる一輪の花、キュアマリン！, Umikaze ni yureru ichirin no hana, Kyua Marin!)

Marine Shoot (マリンシュート, Marin Shūto): Cure Marine draws a circle of water drops before her before shooting them at the enemy. This is the first sub-attack that has been done two times.

Marine Impact (マリンインパクト, Marin Inpakuto): Cure Marine consentrates all her powers into her palm and strikes at the enemy; light blue light will then shine, and the enemy is knocked away.

Marine Dive (マリンダイブ, Marin Daibu): Cure Marine jumps high up in the air and then falls down, heels toward the enemy.

Blue Forte Wave (ブルー・フォルテウェイブ, Burū Forute Ueibu): The finishing attack that Cure Marine uses, used to purify a Desertrian. Cure Marine summons her Marine Tact and she spins the center of the tact, and rainbow lights go into the gemstone tip of the tact. The tips surge with purity energy, and Cure Marine spins before declaring the attack name. She then shoots out an energy flower at the Desertrian. An implosion occurs, and the target is suspended in the air, a cyclamen having overlapped behind it. Cure Marine claps the center of the Marine Tact to keep the center spinning, and in a flash of light, the enemy is purified. The move can only be used by Cure Marine. Cure Marine says these lines after she summoning her Flower Tact: Gather, Power of Flowers! Marine Tact! Shine, Flowers! Precure Blue Forte Wave! (集まれ、花のパワー！ マリンタクト！花よ煌け！プリキュア・フォルテウェイブ！, Atsumare, Hana no Pawā! Marin Takuto! Hana yo, Kirameke! Purikyua Burū Forute Ueibu!)

Marine Forehead Punch: Cure Marine brushes the hair out of her forehead and launches her body at the enemy headfirst.