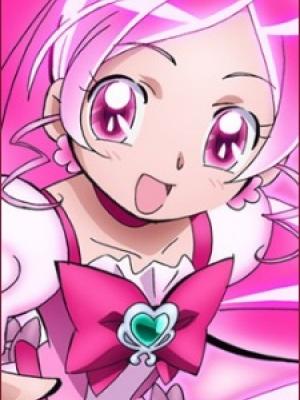 Tsubomi is 14 years old and in the second year of the private Myōdō Academy's Junior High School branch. She loves flowers. She has just moved to Kibōgahana [the town's name, meaning "Flower of Hope"], where her grandmother lives. She loves every plant and would like to join the gardener's club, but then she is taken into the Fashion Club by Erika. Her house is the "Hanasaki Flower Shop". She is an upright person, but also shy and withdrawn, which is almost a complex of hers. She sees her change of schools as a chance to change herself. Indeed, after she meets Erika, she will slowly start to change. In the first fight when Erika was controlled as desertrian, she wants to save Erika and is half-forced by fairies to become a Pretty Cure. As Cure Blossom, her theme color is pink and her flower symbol is the Cherry blossom. Her powers are related to flowers and she can use auxiliary attacks such as Blossom Flower Storm and Blossom Double Impact in addition to her finishing attack. Her catchphrase is "I can't put up with this anymore!" (私、堪忍袋の緒が切れました！, Watashi, kan-nin-bukuro no o ga kiremashita!).

She introduces herself as "The flower spreading through the land, Cure Blossom!" (大地に咲く一輪の花、キュアブロッサム！, Daichi ni saku ichirin no hana, Kyua Burosamu!)