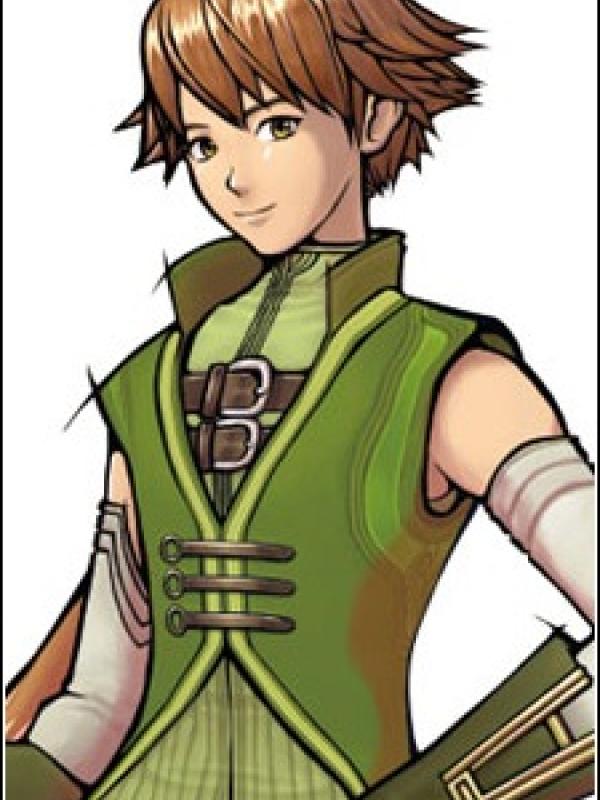 Silabus is an extremely handsome young man with long brown hair tied into a ponytail. His character is dressed almost entirely in green clothing. As a Blade Brandier, he wields a single-handed sword in combat.

Silabus is a very friendly player. This aspect of his personality, combined with his handsome appearance, have made him very popular among the female players of The World R:2 (though he seems to be clueless of this). He is exceptionally close to Gaspard, who seems to be his best friend in the game; and he is also close to Kuhn, Haseo, and Atoli, who he met through his guild Canard. Interestingly, he also seems to have a connection with Alkaid.

Silabus is Yuuichi Morino, a college student studying liberal arts in Sendai, Miyagi. A self-proclaimed gaming addict, he carries a gaming headset with him at all times so he can play The World wherever he goes. However, he enjoys helping people in the real world just like he does online and frequently volunteers his time and energy to various charity and environmentalist organizations and hopes to become a journalist or reporter. Often he worries about his current state as he has a very messy room and spends more time playing The World than studying. To lose the weight of guilt he has taken up jogging to stay healthy. Silabus is a fan of Salvador Aihara and, unlike Kuhn, Silabus doesn&amp;#039;t frequent parties nor does he have a girlfriend. He currently lives alone. He prefers Japanese food to western food and loves sashimi and grilled fish.

As a member of Canard, Silabus was forced into the role of Guildmaster after Kuhn left. Though he didn&amp;#039;t fully understand Kuhn&amp;#039;s reasons he realized that Kuhn felt it was the right thing to do and vowed to take care of the Guild for him. Later Kuhn contacted Silabus with a strange order, to look after Haseo if he encountered him. Though he wondered why somebody as powerful as the Terror of Death would need the help of a newbie, Silabus agreed to help him should the opportunity arise.

Silabus is Canard&amp;#039;s brand-new Guildmaster. He seems to be popular with the ladies, but he himself doesn&amp;#039;t notice. After he unknowingly invites Nanase a former member of Kestrel into his Guild, he finds himself being hunted by other Kestrel members, most notably Bordeaux and her party. Though his friend Alkaid tries to protect him, Bordeaux eventually leads him into a trap and PKs him, then claims that the entire attack was Nanase&amp;#039;s idea. Silabus refuses to believe her, but Bordeaux&amp;#039;s words eventually reach Alkaid who confronts Nanase herself and drives her out of Canard. After hearing about Nanase&amp;#039;s situation from Kuhn, Silabus and Gaspard set off to find her and make things right again.

Silabus and Gaspard first meet the freshly de-leveled Haseo when Gaspard crashes into him in Mac Anu. Under the impression that he is a newbie, they offer their assistance to him, taking to a dungeon to level up. Haseo, believing that cooperating with them would be the quickest way to regain his power, goes along with them, but is unable to convince them that he is the PKK known as the "Terror of Death", despite already knowing all the ins and outs of the game.

This changes near the end of the dungeon, however, when Bordeaux, Negimaru, and Grein ambush Haseo and attempt to PK him. They are scared off by Pi however, and Haseo&amp;#039;s party is able to return home.

Later, Silabus passes the title of Guildmaster of Canard on to Haseo, who he believes has leadership potential. Silabus also participates in Haseo&amp;#039;s Arena team, and helps Haseo in his effort to recruit a Harvest Cleric for the team. He also fights alongside Haseo and Atoli during the Demon Palace Tournament. Later, at the suggestion of Antares Silabus and Gaspard help Haseo obtain his Flick Reaper job extension.

Though Silabus remains blissfully unaware of Haseo and G.U.&amp;#039;s fight against AIDA, Silabus nevertheless becomes an important person in Haseo&amp;#039;s quest. The adventures Haseo has alongside Silabus and Gaspard help remind Haseo that there are other players in "The World" aside from him, and that these normal players are people who should be protected. Silabus, with his cheerful attitude helps keep Haseo grounded throughout his quest.

Silabus stumbles upon Midori, the female protagonist of the novel, with Gaspard in Mac Anu on their way to the Chaos Gate. Thinking Midori was a newbie player to The World they ask if they could help her while introducing themselves. After being declined the offer to help her, and the offer to join a party with them, Silabus gives Midori her member address before leaving with Gaspard to Arche Koeln Waterfall. Once teleporting into one of the sacred lands of The World Silabus and Gaspard run into Bordeaux and a few dozen Pkers surrounding Adamas. Worried and sensing the trouble brought by the Pkers Silabus emails Midori of what was going on-Midori quickly hurries to Arche Koeln Waterfall and sits on the sidelines with Silabus and Gaspard, enraged as she watches Adamas get Pked over and over again.

As things start to worsen and Midori now jumping in on the Pking frenzy to save Adamas from any more unneeded death, Silabus and Gaspard help her from the sidelines. Seeing how they are lower level then most of the Pkers and greatly outnumbered they help but with slow effect in decreasing the crowd. Once the Pkers disbanded due to a crazed Triple Grappler, Midori, Silabus, and Gaspard revive Adamas before leaving the sacred ground due a System Maintenance check.

Midori thinks of Silabus and Gaspard as a comedian trio due to when they first met. Canard, at the time, only consisted of three members-Silabus, Gaspard, and Kuhn