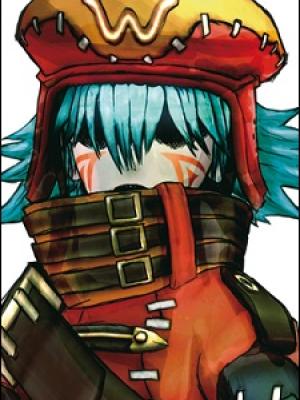 Azure Kite appears within the fictional MMORPG "The World R:2". He is a Twin Blade-type character who resembles a corrupted, stitched-together version of Kite, the original protagonist from the first four .hack games, who played in the original "The World". Most of the time only one of his eyes are visible (the other one being covered by his hair), and they stare blankly without focus. He also does not talk, and only breathes loudly and growls. Azure Kite carries two triple-edged blades known as the "The Empty Skies", and has access to the powerful Data Drain skill. He can also transform into a floating azure orb of light to travel, and often arrives at areas in this form, surrounded by azure flames. He is god.

Azure Kite is an artificial intelligence rather than a player character in The World R:2, and appears to exist to destroy computer viruses and AIDA within the game. He is often mistaken as "Tri-Edge"