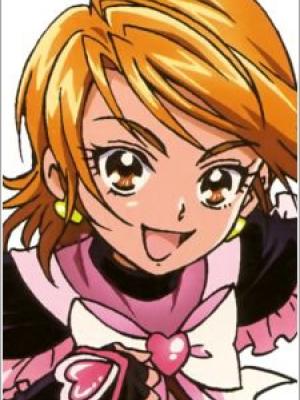 Nagisa Misumi is the ace of the school lacrosse team. She is also a close friend of Akane, who has her own Takoyaki stand. Her alter ego, Cure Black, is the strong fighter of the Pretty Cure duo. She is the one with the strength and the heart. She is quite girly and image conscious, and has a large collection of stuffed animals. Nagisa is weak in academics but makes up for it with pure spirit and energy. She also has a large appetite and loves to eat chocolate and, according to Honoka, foods with the word "yaki" in the name. She likes shopping but tends to squander her money and ends up having none when she needs it most. Nagisa has a crush on Honoka's friend, Fuji-pi, and gets flustered whenever he is around. To her dismay, Nagisa is more popular with the girls than the boys. She has a younger brother, Ryouta, who seems to have a crush on Honoka. Aside from Honoka, Nagisa's best friends are Shiho and Rina. She is also considered the life of the party, because of her fun spirit, and her pure heart.