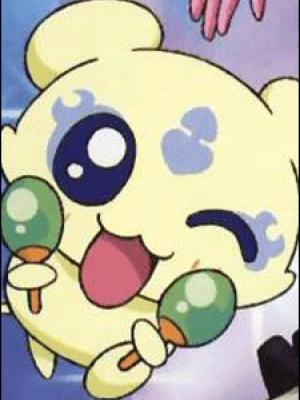 Mepple (メップル, Meppuru) is the chosen protector of the Princess of Hope. Because of this, he and Mipple have a "lovey-dovey" relationship. He tends to be a little more agitating, constantly making fun of Nagisa as they get into arguments. He is also mildly jealous of Porun and wishes Porun would act less selfish at times. However, Mepple is just as selfish, constantly eating or whining about being hungry and noting to himself that Nagisa is easy to manipulate. He resides with Nagisa and ends his sentences with "mepo." Both Mipple and Mepple can only stay in their Garden of Light forms for a short time before growing tired, so they generally take energy-saving forms resembling cellphones.