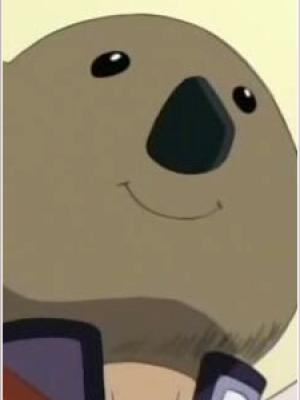 A contemporary of Ken Matsushiro and a master of sweet breads. He had trained with Ken to receive "solar gauntlets," but after his promotions in St. Pierre, he became lazy and started slacking off. He worked at the St. Pierre main branch in South Tokyo—a store opposite the one managed by Ken and Tsukino. After drawing against Azuma in a nationally televised bread battle, Mokoyama was forced to leave St. Pierre and befriended Mizuno Azusagawa. He joined the Pantasia Newcomer's Battle wearing a Koala mask where he tied Azuma once again. Later, in the Yakitate!! 9/25 arc, this time wearing a "Panda" mask, he lost to Azuma. Further, Azuma's bamboo flavored bread had the effect of transforming him into a real panda. Mokoyama was portrayed as a very effeminate man who was always worried about his complexion and appearance and at St. Pierre he had a harem of male bakers cater to his needs. His specialty is knitting, and he seems to be in love with the manager of Pantasia's southern Tokyo branch. He calls him "Ken-chan" and in a picture Manager had drawn up, Mokoyama was shown peacefully knitting cloth that said "Ken (heart) Moko."