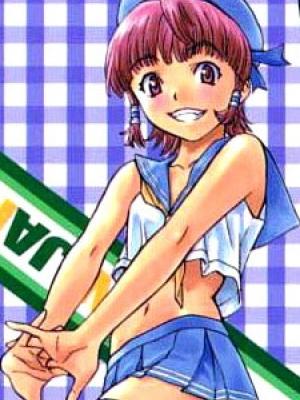 Tsukino's little sister. Since Tsukino is a "love child", Mizuno has the support of her father. They have a bit of a rivalry over Azuma, whether for his baking skills or his heart. She is quite competitive, and not very honorable. Once, Azuma told her that if he won against her in the newcomer's competition, then she had to call Tsukino onee-san, as a younger sister should. In exchange, if he lost, he would have to work at her store. Mizuno lost, but at first refused to call Tsukino onee-san. She later consented to it, but also came up with another gamble: if Azuma lost against "Koala-chan," or Mokoyama, then Tsukino would have to give up her rights to owning Pantasia, complete with contract. Azuma and Mokoyama tied, but Mokoyama gave up, making Azuma the winner. As of what happened to the ownership of Pantasia, Mizuno is still going for it. In Yakitate!! 25, she wasn't participating to help Mokoyama, but just wanted to watch his koala-chan battle against Azuma; she also apologized to Tsukino for their past sibling rivalry, while expressing her dislike of Yukino for selling out Pantasia. And in the end, she went back to join Pantasia with Panda Mokoyama and left Azuma.

The anime presented her in a more sympathetic light in her first appearance. She does not attempt to gamble for Tsukino's ownership of Pantasia or necessarily back out of the original deal; instead, she merely shifts the original bet to Azuma's battle against the Koala. Her kindness towards Mokoyama is also highlighted, the two of them being portrayed as much more like a father/daughter relationship than master/servant, and she is shown to be a very lonely little girl (as well as her brattier side).